or, old long-since. The poem by Robert Burns is of friends past and present and of the goodness and kindness which we hope follows them and the memories we keep.

Here's my favourite version of the song, sung by Eddi Reader. One of the things that this past season of Advent has pressed upon me is that I do not look enough to Jesus. What I forget is that everything points to him. I don't mean I literally forget, but I get distracted, and oftentimes what or whom is directing my attention to Christ ends up the receiver of my focus. When I read of Adam and Eve, of Abraham, Sarah and Isaac, of Moses and the law, of Deborah and the other Judges, David and the Kingdom of Israel, the Prophets, Luke's Gospel, Paul's letters, they all point to Jesus. Jesus said, "If you've seen me you've seen the Father.", yet I tend to focus everywhere else, even on things which are good, such as family, doctrine, health, service, etc.

I need to remember that Jesus is the source of all that is good and just and loving and life. What better time to than Christmas, when so much of the world is pointing, to really look, not at who is pointing, (or not pointing for that matter), but to whom they point.

Everything begins and ends in Jesus. Amen.

"Of the Father's Love Begotten"
by Aurelius C. Prudentius, 413, cento
Translated by John. M. Neale, 1818-1866
and Henry W. Baker, 1821-1977
1. Of the Father's love begotten
Ere the worlds began to be,
He is Alpha and Omega,
He the Source, the Ending He,
Of the things that are, that have been,
And that future years shall see
Evermore and evermore.
2. Oh, that birth forever blessed
When the Virgin, full of grace,
By the Holy Ghost conceiving,
Bare the Savior of our race,
And the Babe, the world's Redeemer,
First revealed His sacred face
Evermore and evermore.
3. O ye heights of heaven, adore Him;
Angel hosts, His praises sing;
Powers, dominions, bow before Him
And extol our God and King.
Let no tongue on earth be silent,
Every voice in concert ring
Evermore and evermore.
4. This is He whom Heaven-taught singers
Sang of old with one accord;
Whom the Scriptures of the prophets
Promised in their faithful word.
Now He shines, the Long-expected;
Let creation praise its Lord
Evermore and evermore.
5. Christ, to Thee, with God the Father,
And, O Holy Ghost, to Thee
Hymn and chant and high thanksgiving
And unending praises be,
Honor, glory, and dominion,
And eternal victory
Evermore and evermore.
Posted by Gina at 12:35 AM No comments: 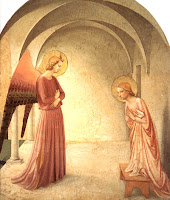 The lectionary readings for today are:

I love the Gospel according to Luke, and while I have every intention of completing a series on this gospel at some point, I'll take a bit of what a future post may contain to mark this day.

In the society in which Mary lived, she would have been pretty much a nobody: poor, a female and unmarried. To get much lower, one would have had to have been an expendable, basically a beggar or leper. Now, she was not alone, most of society were peasants, but she would have been much more vulnerable than a married man in that class. Yet it is she who  found favor with God. Displayed for us is the thread woven throughout scripture, that God is no respecter of persons. In fact, he seems to always be turning our ideas of status upside down. Here, before Jesus, God incarnate, is conceived, the lessons he will teach on his earthly life are being taught already through a peasant Jewish girl.

When confronted with the message from the angel Gabriel, that she will bear a son, Mary asks for no sign, but for understanding. The angel Gabriel graciously gives her both, understanding in how the God most High will overshadow her and a sign in that her elderly cousin Elizabeth has conceived and will have a son.

Nothing is impossible with God, not for Mary, and not for us.

Lord give me not a sign, but trust and understanding.

Borrowed this from Eagle, a frequent commenter over at IMonk.

For those who are familiar with the arguments as to why women shouldn't be pastors or ministers, (despite the fact that women were prophets, deacons apostles and teachers in the early church), this list puts them in a whole new light. 9. For men who have children, their duties might distract them from the responsibilities of being a parent.

8. Their physical build indicates that men are more suited to tasks such as chopping down trees and wrestling mountain lions. It would be “unnatural” for them to do other forms of work.

7. Man was created before woman. It is therefore obvious that man was a prototype. Thus, they represent an experiment, rather than the crowning achievement of creation.

6. Men are too emotional to be priests or pastors. This is easily demonstrated by their conduct at football games and watching basketball tournaments.

5. Some men are handsome; they will distract women worshipers.

4. To be an ordained pastor is to nurture the congregation. But this is not a traditional male role. Rather, throughout history, women have been considered to be not only more skilled than men at nurturing, but also more frequently attracted to it. This makes them the obvious choice for ordination.

3. Men are overly prone to violence. No really manly man wants to settle disputes by any means other than by fighting about it. Thus, they would be poor role models, as well as being dangerously unstable in positions of leadership.

2. Men can still be involved in church activities, even without being ordained. They can sweep paths, repair the church roof, change the oil in the church vans, and maybe even lead the singing on Father’s Day. By confining themselves to such traditional male roles, they can still be vitally important in the life of the Church.

1. In the New Testament account, the person who betrayed Jesus was a man. Thus, his lack of faith and ensuing punishment stands as a symbol of the subordinated position that all men should take.

This Sunday is also known as Gaudete Sunday, the Sunday of rejoicing. I don't know how much rejoicing we do these days in our culture. It seems to me we mostly anesthetize our emotions, largely by distraction, so as to not feel too much pain, but that also means we do not feel much joy. We seem surprised when either come upon us, but how we are undone when they do! I pray that God diverts me from my diversions, so that I may know the joy and hope that Mary expresses.

The video below is from Sheppard's Magnificat.

Today is the Feast of St. Nicholas. I've always loved Santa Claus. In fact, when I learned that there was no Santa Claus while in second grade, I simply refused to believe it. Later, I learned that my stubbornness was not without reason. There really had been a Santa Claus, though the name has morphed and he was much more than a jolly old man. He was a Christ follower, a Christian, and all the legends of gift giving and magic were true in the best sense. Nicholas of Myra was a wealthy man whose faith in Christ transformed his life to one of self sacrifice and healing.

During this Advent season, how wonderful it is to remember this faithful man who came before us. This is what I love about the communion of saints. He is as real today as he was over 1500 years ago. Sometimes a child's stubborn faithfulness is a good thing.

Here's a video clip of the real story of this beloved man.

These are incredibly beautiful and hopeful passages reflecting God's goodness, mercy and love, and ones that I need to hear. When so often my thoughts about God reflect more a hard taskmaster or a distant lawmaker, I need to be reminded that we have a Father who is patient, merciful and makes everything right, whether from Isaiah's words that rough places will be made smooth and our sins have been paid for, or Peter describing the destruction of the heavens and earth when all will be exposed and making way for the new heavens and new earth.

Mark tells us it is John, son of Elizabeth and Zachariah who is the voice from Isaiah. Having waited hundreds of years, Israel finally hears what they have longed for; the Messiah is near, so be prepared. Peter repeats this theme. Wait patiently and be prepared. He will come and all will be made right.
Posted by Gina at 9:57 PM No comments: