Those of you who know me personally or through this blog will appreciate that I have a great love for C.S. Lewis.  His writings convey wisdom, intellect and character with great transparency, so much so that one who reads him widely and deeply gain a sense of really knowing the man.  This said, it may surprise some to know that the newest publication of some of his works leaves me apprehensive.  The latest publication is, The C.S. Lewis Bible

Ever since reading my dad's Ryrie Study Bible as a teen and perceiving a definite slant in the commentary, I've been hesitant to purchase a study Bible.  I like my Bible straight.  I even refrain from making notes in my own Bible so as not to influence or dampen what the Holy Spirit may bring to mind in subsequent readings.  This is not to say that I do not recommend commentaries. I do.  But I recommend reading several and reading them after having read the passage in the Bible on which is being commented, so that one receives the full affect of scripture before anyone's further interpretation.

I also like Lewis straight and in context.  He was such a wise and prolific writer, that to find quotes about almost any aspect of life is easy and often helpful when trying to grasp an issue.  One of the contributors to the new C.S. Lewis Bible, Jerry Root, whom I've had to good pleasure to meet and learn from when he came to Roanoke to speak on Lewis, has even co-edited a book of Lewis quotations, The Quotable Lewis

.  This is a great reference book, particularly when one remembers a quote from Lewis but can't remember which of his many books or letters from which it comes.  However, I would never recommend taking this book and reading these snippets in order to grasp Lewis' thoughts, yet this is what this new Bible has done.  Lewis himself hasn't written commentary of the scripture, but quotes of his which are thought to relate to a passage of scripture are printed as his commentary.  As with any great thinker, one should read what is written in context to gain a fuller understanding of the thoughts behind the quote.

The final reason which causes my apprehension is that I think Lewis himself would be appalled to have a Bible named after him.  Lewis was a very humble man, insisting that he was just a layman and not an expert on scripture or church matters.  He even turned down Knighthood when offered to him, though he held the idea of knighthood very highly.  While it seems a great honour, and I'm sure many if not all of those who worked on this project had the very best of intentions, I don't think Lewis himself will be very pleased.

To learn a bit more about this study Bible, listen to this podcast over at Books and Culture website.
Posted by Gina at 1:59 PM 2 comments:

Advent: A Time To Prepare

Today is the first Sunday in Advent.  I love Advent and it has become my favorite church season.   Begun in 367 AD by Hilary de Poitiers as a three week preparation for Christmas, it is a time of preparation, expectation and hope.  Yes, Jesus has come, he is indeed God incarnate, yet he is coming again.  I suppose for me, waiting for the eschaton becomes more real for me during this time.  How can I prepare?  As Archbishop Rowan Williams asks, "What will happen if Jesus is allowed into my life more fully and radically?"

So, to prepare will take time, time to study, to pray, to reflect.  Already my schedule is filled - every weekend taken up with choir and ballet rehearsals and performances, and there is the shopping to do, along with normal life and responsibilities.  It's as though Satan has devised a way that leaves us more exhausted, more depleted, so that by the time of Christmas and celebration, we no long want to hear another Christmas hymn or attend another gathering, or give to another worthy cause, because we and our bank accounts are spent.  I don't want it to be this way and I'll have to think more about what this may mean to be able to work around what has already been committed to this year, but also to better plan for the next.

Following is a wonderful Advent message given by Archbishop Williams.  I hope you find it as much a blessing and inspiration as I have.

I came across this cartoon this evening.


And in the Bible to bless God is not a “religious” or a “cultic” act, but the very way of life. God blessed the world, blessed man, blessed the seventh day (that is time), and this means that he filled all that exists with His love and goodness, made all this “very good.” So the only natural (and not “supernatural”) reaction of man to whom God gave this blessed and sanctified world, is to bless God in return, to thank Him, to see the world as God sees it and — in this act of gratitude and adoration — to know, name and possess the world. All rational, spiritual and other qualities of man, distinguishing him from other creatures, have their focus and ultimate fulfillment in this capacity to bless God, to know, so to speak, the meaning of the thirst and hunger that constitutes his life. “Homo sapiens,” “homo faber” … yes, but first of all, “homo adorans.” The first, the basic definition of man is that he is the priest. He stands in the center of the world and unifies it in his act of blessing God, of both receiving the world from God and offering it to God — and by filling the world with this eucharist, he transforms his life, the one that he receives from the world, into life in God, into communion with Him. The world was created as the “matter,” the material of one all-embracing eucharist, and man was created as the priest of this cosmic sacrament.

The word eucharist means thanksgiving.  Every Sunday, we meet to join in the Great Thanksgiving, but what about every other day, or every other minute for that matter?  As Schmemann said, every moment is to be lived eucharistically, thankfully, recognizing the One who has blessed us.  Schmemann goes on to say that when mankind ate of the food in the garden which was not given as a blessing, it was eaten not as communion with God but as an end in itself.  Because of this we are now inclined to forget God, to become dependent on the food itself or powers or fate and without communion with God, there is no life. 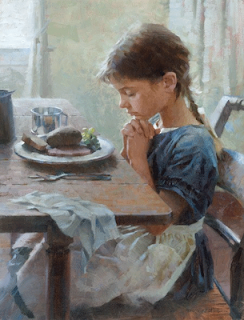 Of course, God has not left us to this fate.  He has come down, to rescue us, to transform us, that we may again live our lives in continuous communion with him, Father, Son and Holy Spirit.  We are once again, receiving the blessing of this world and in our role as priest, able to bless God in return.

May you have a blessed Thanksgiving!
Posted by Gina at 1:28 AM No comments:

Or, as my husband said, "The veil became a little thinner at Macy's."

H/T to Jean McDermott
Posted by Gina at 10:07 PM No comments:

The One I Love, Whose Name I Do Not Know

When our baby died almost a year ago it was only a tiny little fetus.  I did not have the opportunity to hold, name, (though while I was pregnant, our girls would call the baby, P.E.R.C.- the initials of names we were considering), or say goodbye .  Our dear friend and pastor, Gerry offered to hold a funeral for our child, but David and I decided not to have one.  I wonder now if that had been the right choice.  When babies die this way, this early, there seems to be an expectation in our society that we are to 'move on' and not spend too much time grieving, and I'm sure that influenced our decision.

Today is All Saints Sunday.  As I wrote in my previous post, November 1st was All Saints Day, but many congregations will remember those who have died in Christ today.  David and I talked about if we should include our baby among those who will be remembered, and I spoke with another dear friend and pastor, Mark, and we've made a different kind of decision for today.  Today, when the names of those in our congregation who have died this past year are named and remembered, our little one will be remembered too, as Baby Hawkins.  I wish we had a name for him or her, but I know she or he is not without one.  Revelation 2:17 says:


To the one who conquers I will give some of the hidden manna, and I will give him a white stone, with a new name written on the stone that no one knows except the one who receives it.

C.S. Lewis writes of this verse in The Problem of Pain


What can be more a man's own than this new name which even in eternity remains a secret between God and him? And what shall we take this secrecy to mean? Surely, that each of the redeemed shall forever know and praise some one aspect of the divine beauty better than any other creature can. Why else were individuals created, but that God, loving all infinitely, should love each differently? And this difference, so far from impairing, floods with meaning the love of all blessed creatures for one another, the communion of the saints. If all experienced God in the same way and returned Him an identical worship, the song of the church triumphant would have no symphony, it would be like an orchestra in which all the instruments played the same note. Aristotle has told us that a city is a unity of unlikes, and St. Paul that a body is a unity of different members. Heaven is a city, and a Body, because the blessed remain eternally different: a society, because each has something to tell all the others - fresh and ever fresh news of the 'My God' whom each finds in Him whom all praise as 'Our God.' For doubtless the continually successful, yet never completed, attempt by each soul to communicate its unique vision to all others (and that by means whereof earthly art and philosophy are but clumsy imitations) is also among the ends for which the individual was created.

Our child has a name, one more perfect and revealing than our family could have chosen, given by the One who loves perfectly, just as all the saints do.  Today is a day we don't just 'move on' or any other such ridiculous notion, but we remember, even as we look forward in hope.
Posted by Gina at 2:08 AM 2 comments: