From Whence Comes Your Authority?

Sometime last year I read an article by Mark Galli. Now, I read a lot of articles, some I remember, but most I might take in a bit of information, then they are mostly forgetten. Not so with Galli's article. The article had to do with authority. This is a topic that comes up a lot in society. There are arguments over who or what has authority in government, the church, private and public organizations, business, and even the family. These arguments are really over who has power, and that's why this particular article was so memorable for me, because he says, and I think rightly so, that one's authority comes from love. He says:


So, the temptations to ground our authority in anything but love will be with us always. But sooner or later, God's good grace will knock us up the side of the head. We'll discover that disconcerting but liberating news that we have no power to ground our authority in the first place. It is something grounded in us, and grounded by another. And that other grounds it in love—more particularly, his love for us. In the same way that we are called to listen to Jesus because the Father loves him, so people in our charge are called to listen to us only because the Father loves us.

I think of this in relation to two stories. One, a story by a French author written in the mid 19th century, Victor Hugo, and the other told by Jesus.

The first is Les Miserables. My husband and I took in the movie version of Les Miserable tonight, and I couldn't help feeling for both characters, Jean Valjean and Javert, and they reminded me of the second story, told by Jesus of The Father and Two Sons. Valjean fell from grace, not terribly far by our societies standards, yet he fell. He stole a loaf of bread. He of course reminds me of the younger son in Jesus' story, who actually fell a lot further than Valjean. And, of course Javert reminds me of the elder brother, insisting that law and standards be maintained. They aren't perfect representations of the other, but there are enough similarities, that I can't help but wonder if somewhere in the back of Hugo's mind Jesus's parable bled through.

The second story, told by Jesus is often referred to as The Prodigal Son, but really the story is about the father, or Father, and I think the same is true for Les Miserables. The father loves the wayward son so much that he rejects laws and traditions in order to restore him, and in this story, we have the hope that this son in receiving this gift of grace will live worthily of it, because he can be confident of his father's love. The father loves the first son as well, and has bestowed on him every grace he has needed, including himself, yet the first son doesn't understand this. He expects his father to care for him because he has followed the rules and traditions. He hasn't understood that it is simply the father's love that keeps him in his father's care.

The same can be said of Valjean and Javert. Valjean, shown the Father's grace through a priest, accepts that love, gives up his righteous anger, and blesses those with whom he has contact. This isn't without cost to him, as love always sacrifices, yet he grows in heart and courage as he aids those who need him. He is empowered by the Father's love.

Javert is just as confused as the elder brother. How can one live if the rules don't count? What happens if the ledger doesn't add up? In the same way the elder brother can't understand that he is accepted and empowered, not by keeping the rules, but because his father loves him. In the end, not being able to accept the Father's grace and love leads to Javert's destruction.

Of course both stories and both men are about us. Do we treat others with the authority which love gives, or do we want everything to add up and to be square? Are we able to proceed confidently and lovingly because we are so confident in the Father's love for us? If we aren't, then we will seek power over others instead of aiding and loving them as they so need. It is through the authority of love which we work to see the Kingdom expanded. All the rest is straw.

Update:  My apologies for having earlier mispelled Javert.
Posted by Gina at 12:45 AM No comments:

Tolkien would have been 121 years old today. Here is a recording of him reading from The Hobbit. This was the scene that my daughters most enjoyed in the movie. 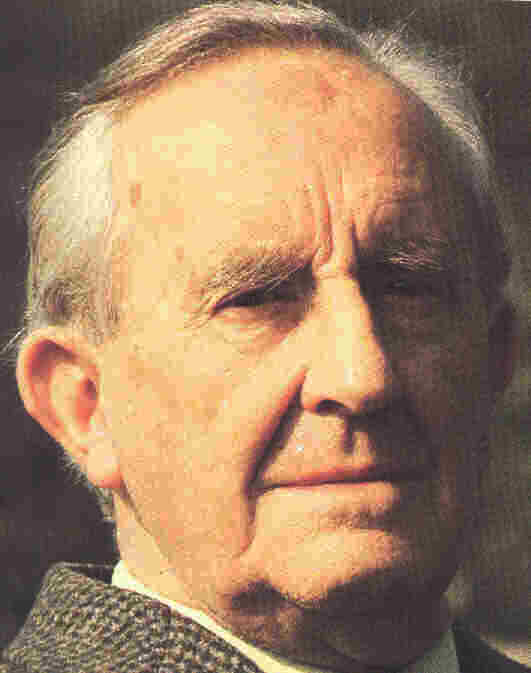