Lo, I Am With You Always

How very moving that the first food that was consumed on the moon was the body and blood of our Lord, Jesus Christ. How interesting also that this information was blacked out for twenty years because the government was afraid.

Here is a portion of what happened.

Buzz Aldrin had with him the Reserved Sacrament. He radioed: “Houston, this is Eagle. This is the LM pilot speaking. I would like to request a few moments of silence. I would like to invite each person listening in, whoever or wherever he may be, to contemplate for a moment the events of the last few hours, and to give thanks in his own individual way.”

Later he wrote: “In the radio blackout, I opened the little plastic packages which contained the bread and the wine. I poured the wine into the chalice our church had given me. In the one-sixth gravity of the moon, the wine slowly curled and gracefully came up the side of the cup. Then I read the Scripture, ‘I am the vine, you are the branches. Whosoever abides in me will bring forth much fruit.’ I had intended to read my communion passage back to earth, but at the last minute Deke Slayton had requested that I not do this. NASA was already embroiled in a legal battle with Madelyn Murray O’Hare, the celebrated opponent of religion, over the Apollo 8 crew reading from Genesis while orbiting the moon at Christmas. I agreed reluctantly…Eagle’s metal body creaked. I ate the tiny Host and swallowed the wine. I gave thanks for the intelligence and spirit that had brought two young pilots to the Sea of Tranquility. It was interesting for me to think: the very first liquid ever poured on the moon, and the very first food eaten there, were the communion elements.”

H/T The Scriptorium Daily
Posted by Gina at 11:32 PM No comments:

In today's Wall Street Journal, Joe Queenan writes on the journalistic watering down of the word "icon".

This is actually something that has bothered me for a while. The word icon comes from the Greek, eikon. It refers to something that is an image or representation of something that is more real or greater than itself. The Bible uses this word to describe humans, being made in the image of God and of Christ being the perfect image of God, the perfect icon. In the biblical sense each human is an icon, though flawed to various degrees, all could be spoken of in terms of being an icon of the living God.

Works of religious art, images on a coin or even images on a computer screen can be properly called an icon because they point to something greater and more real.

This isn't how journalists and commentators use the word when describing celebrities, however. What happens when we start using this word for popular people in culture? When we say that Michael Jackson was an icon, what are we saying? What does he represent, and is what he represents worth imitating or looking toward? It abuses the word so badly that it no longer contains its proper meaning. Perhaps the creators of American Idol have a more proper terminology for celebrities of this kind. According to The Free Dictionary, the term idol means:

1.a. An image used as an object of worship.
b. A false god.
2. One that is adored, often blindly or excessively.
3. Something visible but without substance.

Is this not a more proper term for the role of many celebrities?
Posted by Gina at 12:58 PM No comments:

Rod Dreher first introduced me to Rickrolling, an occurrence when one opens a link or post only to find one's opened a portal to a Rick Astley video. He's found another way to be Rickrolled. Try not to cry, all you die hard Nirvana fans - this is fun stuff.

Today, Amazon removed George Orwell's 1984 and Animal Farm from its Kindle e-book store. The company also went ahead and removed any digital trace of the books, too-striking them from both users' digital lockers and from Kindle devices. This disturbing, Orwellian move underscores how, in spite of comments otherwise, a purchase in the digital realm can't be compared to physical ownership of content.

Oh, the irony! So, the gist of the article is this: If you receive information electronically, such as music, books, movies, etc...consider it a rental. The idea of not having to store cds is appealing to me, but I've always loved having books around. In fact, I kind of wonder about people who don't.
Posted by Gina at 9:59 PM No comments:

The Books Behind Harry Potter

Harry Potter and The Half Blood Prince opens at midnight, so in honor of the occasion, I'm posting a link to John Granger's, (aka The Hogwart's Professor), new book. n

Today, my daughter Emma turns 13. She is a very responsible, funny, lovely and energetic young lady.
Here she is hanging out in the dressing room during The Sleeping Beauty rehearsals. 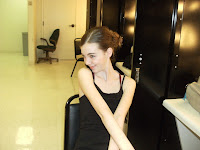 Here's its creed as understood by Smith and Denton and reported in their book, Soul Searching: The Religious and Spiritual Lives of American Teenagers

1. A God exists who created and orders the world and watches over human life on earth.

2. God wants people to be good, nice and fair to each other, as taught in the Bible and by most world religions.

3. The central goal of life is to be happy and to feel good about oneself.

4. God does not need to be particularly involved in one’s life except when God is needed to resolve a problem.

5. Good people go to heaven when they die.

In the end, this is nothing but wishful thinking. It does not answer the perennial human problems of evil, sin and despair. It leads one to have no faith at all, because this is a weak, thin, vague kind of faith, that in the end means nothing. God's love is a costly love - a real love - as one can see from Christ's suffering on the cross. If the point of life is being happy, this is not the kind of happiness Jesus taught. He taught a self-sacrificing life that leads to happiness - to daily take up our cross. This Moralistic therapeutic deism has nothing to say to The Beatitudes, which describes those who have a true and lasting happiness.

1Seeing the crowds, he went up on the mountain, and when he sat down, his disciples came to him.

2And he opened his mouth and taught them, saying:

3Blessed are the poor in spirit, for theirs is the kingdom of heaven.

4Blessed are those who mourn, for they shall be comforted.

5 Blessed are the meek, for they shall inherit the earth.

6 Blessed are those who hunger and thirst for righteousness, for they shall be satisfied.

7 Blessed are the merciful, for they shall receive mercy.

8 Blessed are the pure in heart, for they shall see God.

9 Blessed are the peacemakers, for they shall be called sons of God.

10 Blessed are those who are persecuted for righteousness’ sake, for theirs is the kingdom of heaven.

11 Blessed are you when others revile you and persecute you and utter all kinds of evil against you falsely on my account. 12 Rejoice and be glad, for your reward is great in heaven, for so they persecuted the prophets who were before you.

Are we ready for that kind of happiness? Are we ready to let go of our 'Five steps to a more fulfilling prayer life?' or 'Ten steps to a happier marriage.' Are we willing to say to God, "Be it done to me according to your will?" I say we, not to soften the question, but because as a gen Xer, I have fallen under MTD's sway too often and since it is so much a part of the church culture at large, it is easy for it to seep into my thinking.

Here is a video with short interviews that address the MTD's type of belief in the church.