I don't.  It's not that I haven't tried, it's just that I don't get it.  I remember as a teenager, being really perplexed by not being able to put together an outfit like everyone else did.  There were always discrepencies between what was in the fashion magazines and what people really wore.  For a while I stuck with jeans and sweaters because it was ultimately safe.   How I found what I really liked was by watching movies and television.  I fell in love with the fashions worn in Chariot's of Fire, the Giorgio Armani clothing that adorned the fashion models shown on Style with Elsa Klensch,  many of the outfits worn by Lisa Bonet on The Cosby Show, and later the fashions on the BBC series, House of Eliott.

This led to a certain freedom in how I dress.  As my eldest daughter, Emma,  tells me, "Mom, you have a style, it's just not in style!".  Well, that suits me just fine.  What got me thinking about all of this,  is this graphic that Hipster Christianity sent out on Facebook.  My suggestion would be to skip the cycle and wear what you find to be beautiful and useful.  If you happen to land on the cycle every once in a while, no worries.  Life is too short to be concerned with being too hip or not hip enough. 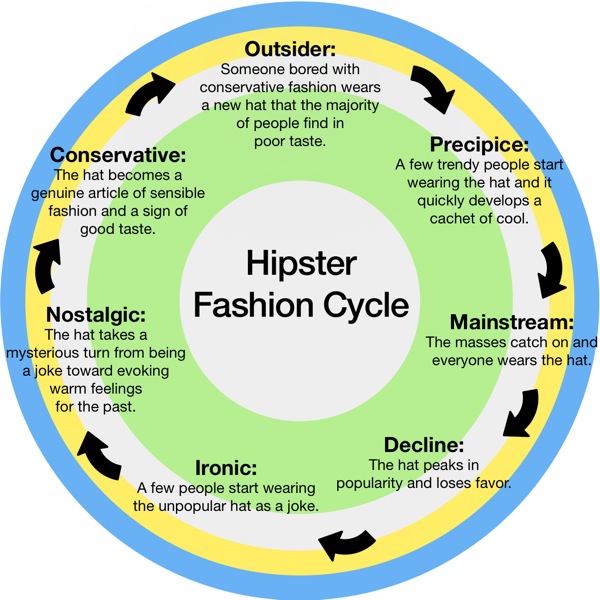 That is the name of a new lightweight airplane that can also be legally driven on the road.

Very cool.
I can't help but think of the aircraft in Metropolis, flying around the city.

The Vatican Gives Two Thumbs Up

Another hat tip to Rod Dreher.  He's been blogging about Stephen Prothero's new book titled God is Not One

, which points out what should be obvious, that the world religions are not the same.  They ask different questions, give different answers and define what it means to be human differently.  Now Prothero's been interviewed by Stephen Colbert.

I like that Colbert is willing to humorously interview religious writers and thinkers.  So much of the time issues of faith are removed from the public square.  Here's an interview with N.T. Wright.


And here's another with scientist and Christian Francis Collins.

Sorry the Like button isn't working correctly, folks.  Have been attempting to fix it, but cautiously, so that I don't remove the necessary html code and lose the blog!  Thanks for your patience.

Update:
I have at least been able to remove the problem without any damage!  Thanks again for your patience.
Posted by Gina at 1:32 PM 2 comments:

Email ThisBlogThis!Share to TwitterShare to FacebookShare to Pinterest
Labels: Blogging

In What Time Do You Live?

Hat tip to Rod Dreher for this educational and entertaining video, The Secret Powers of Time.  In it, time perspective is described by where one lives in relation to the equator, but then is also described by how one's brain is rewired by the use of technology.  One thing in particular that I think is significant, is the speaker, Philip Zimbardo's  description of schools.  He says that schools are passive.  I think this is accurate, but regrettable.  Real learning is active and engaged.  This is what John Taylor Gatto describes so well in his book, Dumbing Us Down

, when he describes what schools do is everything but provide students with an education.  Yes, I know there are many wonderful teachers out there, but the good ones are always having to find a way to work around the system of public and often private educational institutions.
Posted by Gina at 10:20 AM No comments:

A Story Of Life

Below is a clip of Andrea Bocelli telling the story of his brave mother, choosing to let him live despite the odds of his having a disability.  I am reminded of what C.S. Lewis says in Mere Christianity


Courage is not simply one of the virtues, but the form of every virtue at the testing point, which means, at the point of highest reality.  A chastity or honesty or mercy which yields to danger will be chaste or honest or merciful only on conditions.  Pilate was merciful till it become risky.

Yesterday, I received a new journal in the mail, Jewish Review of Books. I haven't ordered it and it is the first issue, so I figure I must be on a mailing list, perhaps since I subscribe to First Things.

One of the articles is fascinating to me. It is titled, Why There is No Jewish Narnia, by Michael Weingrad. The first thing that impresses me about the article is how well the author knows some of the more obscure facts about Tolkien and Lewis. The second is the truly thoughtful and revealing reasons he gives for the lack of fantasy literature written by Jewish authors.

The reasons he gives are that:

1. Much fantasy is tied to the medieval feudal system which is not welcoming to Jews.
2. Jews are heavily invested in modernity.
3. Since the Holocaust, fantasy can make redemption seem too easy.
4. Judaism to a large degree has banished magical and mythological elements.  (Remember, Tolkien and Dyson had been instrumental in Lewis's conversion to Christianity by showing how Christianity was true myth.)


To put it crudely, if Christianity is a fantasy religion, then Judaism is a science fiction religion If the former is individualistic, magical, and salvationist, the latter is collective, technical, and this worldly.

Weingrad goes on to say that these differences are reflected in the much greater number of Jews who are science fiction writers. There are those who are breaking into the fantasy genre and he reviews two books whose authors who are doing just that. One is called The Magicians

, by Leve Grossman, which is more satirical in nature and Ha-Mayim  she-bein  ha-olamot  (The Water Between the Worlds), by Hagar Yanai, a second in a trilogy aimed at adolescents.

I've linked to the article above.  Do make time to read it.  It is as revealing in its presentation of  the Christian faith and its way of seeing the world as it is the Jewish faith.
Posted by Gina at 1:41 AM No comments:

So, What Is A Blog, Anyway?

Switched asks, "What is a blog?". There are some interesting answers, like the guy who refers to bloggers as only a third as smart as they really are. Huh?