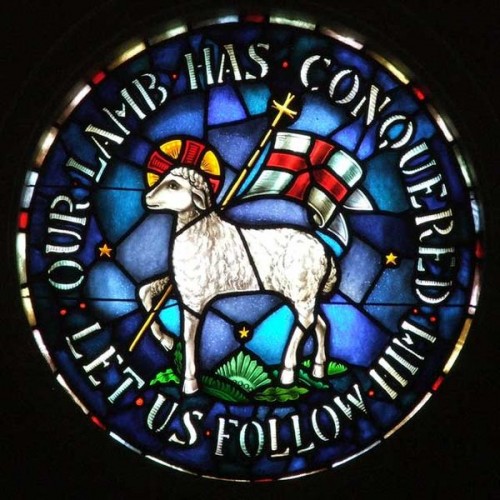 Lately, I've been thinking more about Jesus, his life, his meaning, his purpose, and the image of the Lamb of God continues to come forth in my mind. It is challenging to realize that God in Christ is portrayed as both shepherd and lamb. The one who guards and protects is also the one who is vulnerable and sacrifices.

I recently read that the Orthodox have an understanding of Jesus as Lamb before the foundations of the world. I think they are right. We in the western church have this idea that because we messed up, that God humbled himself to save us, but really, what we see in Christ is that God's nature is humble, serving, and sacrificing. That is true power, that is true love. This is what Jesus taught.

Peter Enns has a thought provoking post on just how hard it is to follow Jesus and to live as he taught. I think we find it difficult for a couple of reasons. One is that our faith is weak, which is another way of saying we cling to our idols. Another reason is that it doesn't make sense to us. We continue to think like the world thinks, ignoring how Jesus took on the form of a servant while also telling his disciples, "If you have seen me, you have seen the Father". The implications are huge, and I think when we finally understand that Christ lived kenotically, not as a fluke or suspension from his nature, but in expressing God's nature, we will better understand that we are called to do the same and in doing so, be transformed into his likeness. How else is what we are called to be even possible?

Below are two songs that relate to Christ as both shepherd and lamb. The first is Howard Goodall's setting of Psalm 23, which I've posted before. The other is a version of Agnus Dei, which is to me the most meaningful part of our worship, before receiving Christ himself. Both express the nature of the one who gives life, our protector and redeemer. Today is Good Friday. For the last four years, the pastors at our church have offered the opportunity for private confession and absolution on this day. This is done as a congregation every Sunday, but privately, only once a year. How does one confess a year's worth of sins on one day? To work with this limitation, I have taken the opportunity during these times to confess and work through sins which are particularly persistent in my life.

This year, I looked up the seven deadly sins to try and gain a better vocabulary and understanding of what I persistently find to be stumbling blocks, before I met with Pastor Mark. What I found is that of the seven, acedia seems to be my weakness or burden. One can witness this in part from the lack of posts here on the blog. It is difficult to complete or even begin a task if one sees the end result being futile, which is the prism through which I see much of life lately. There are times of course when this is stronger than others, and now is one of those times when it is stronger. I'm sure there are many reasons for this.

One is my nature. I have a tendency to observe, to conserve, to want things to be perfect or ideal, and to be sensitive. These traits can be good, but as Lewis points out, sin or evil are not the opposite or absence of good, but the twisting or perversion of it. All of these traits can be paralyzing if not lived out in life giving, sacrificial ways, which I obviously don't always do.

Another reason is probably that I still grieve for our baby who died. In our society a statement like this is usually frowned upon, particularly given that it has been two and a half years, but it's true none the less. In fact, I don't imagine it will ever go away, and from speaking to others who have suffered a similar loss, this is actually quite normal. Painful, but normal.

Still another is the overwhelming matters of injustice in society, in the church, in government. It seems everywhere I turn there is a story of someone abusing power by keeping another ignorant, impoverished and helpless. The methods can be overt, but more often they are subtle and manipulative. Those able see this tend to become activists, rebellious or shut down. I don't think it is any coincidence that over 1 in 10 Americans take anti depressants.

Lastly, another reason, which I also realize is the solution, is focusing on Christ, his life and who he is, and not just who I've been told he is. I've done this through teaching a class on the Gospel of Luke, and also through reading books, such as Inhabiting the Cruciform God, by Michael J. Gorman and others by N.T. Wright and Scot McKnight. It may seem counter intuitive that this has been not just exhilarating but also unsettling. The chasm seems so great between where the church is and what Christ taught, and yet we are still his body. There seems to be an unsettling in much of American Christianity in this regard, as pollster George Barna has been documenting.

These seem to be despairing times. I have attended the funerals of two people this year whose deaths were due to suicide. The sorrow experienced by their loved ones is incalculable. How does one see the reality of this broken world and not fall into despair? As Mark reminded me today, we must be careful not to despair in despairing.

Perhaps, as I expressed above, we do this is by seeing Jesus as he really is. He is the man of sorrows, the one who had compassion, who suffered with, the one who healed, and who leads us to do the same. We aren't going to make everything right, justice will come in dribs and drabs, much of our efforts will seem a practice in futility, yet Jesus calls us to continue, to trust him who will put all things to rights, and who is in some way going about redeeming all that seems futile and wrong.

I logged onto Facebook earlier today, and saw this article, The Contemporary Church is a Crack House. by Peter Rollins, posted by a friend and pastor, Cathy. It is an important reminder of how to deal with the difficulties of life, when facing them head on is too overwhelming and avoiding them just makes them bigger. He writes:


However there is a different way to handle such a traumatic event, one that neither seeks to repress the pain, nor confront it directly. This other way involves participation in symbolic activity. For example, you might go to hear a poet who puts into music the suffering of loss; an individual who is able to speak the type of anger/frustration/pain you feel in lyrical form. In such a poet we encounter an individual who has demonstrated profound courage, for in being able to sing her suffering she shows that she is not overwrought by it; that while it is real she has robbed it of its sting.

As we listen to the music we are invited to participate in a form of communion. A call is being issued asking us to touch the dark core of the music so as to encounter our own dark core. Yet the artistic form is such that this encounter with the darkness is bearable.  We encounter our pain and anger in a way that we can cope with and we begin the work of mourning.
Like the professional mourners at funerals we might not cry, but we are paying someone else to cry on our behalf. Not so that we might avoid our suffering, but so that we may be able to access it in a way that is not crushing.

My concern is that most of the actually existing church acts as a type of drug den with the leaders being like the nicest, most sincere, drug dealers. What we pay for are songs, sermons and prayers that help us avoid our suffering. These drugs are very appealing because of the quick fix and powerful high they offer, hence the success of such communities. However they do not help us face up to, speak out and work through our pain.

In contrast we need collectives that are more like the professional mourners who cry for us, the stand-up comedians who talk about the pain of being human or the poets singing about life at local pubs.

Today is Good Friday and I confessed my sins.
Posted by Gina at 4:30 PM No comments: